On the occasion of the Milan Design Week, Atelier Luma will present a selection of projects at Palazzo Clerici, a historic building located in the heart of Milan which is occupied by HAY for this edition of the Design Week, as part of Atelier Clerici's exhibition project. Offprint participates in the event with an unprecedented editorial proposal which is part of Atelier Luma's scenography.

APRIL 17 / 11-12AM
Breakfast and launch of Disegno #18
Palazzo Courtyard
Please RSVP to ccastellas@luma-arles.org

— APRIL 17–20 / 10–11AM
Join Atelier Luma at the Palazzo Clerici for a series of conversations that brings together Atelier Luma designers and distinguished design figures to discuss the future of materials. For this year’s Salone del Mobile, Atelier Luma returns to the Palazzo Clerici, to present STUDIOLOS. This public installation, designed by Cookies and III +1, investigates a radical redefinition of producing in a global context, addressing the question of revitalizing local crafts, decreasing the circulation of materials and promoting new design practices. STUDIOLOS will act as an open platform, hosting each day a different conversation that highlights a specific aspect of design, production, and materiality manifested in the installation. Confirmed speakers include Paola Antonelli, Aric Chen, Deniz Ova, Matylda Krzykowski, etc…

The talks are free and open to the public.

— THE 19 - 10am
Studio Klarenbeek & Dros in conversation with Johanna Weggelaar (Atelier Luma), Oli Stratford (editor in chief of Designo) and Paola Antonelli (curator at the MoMA, New York)

Please note that program is subject to change due to weather conditions.

EMERGING TALENTS: A PLATFORM FOR THE NEW VOICES IN DESIGN
Presented by HAY - Hosted by Atelier Luma 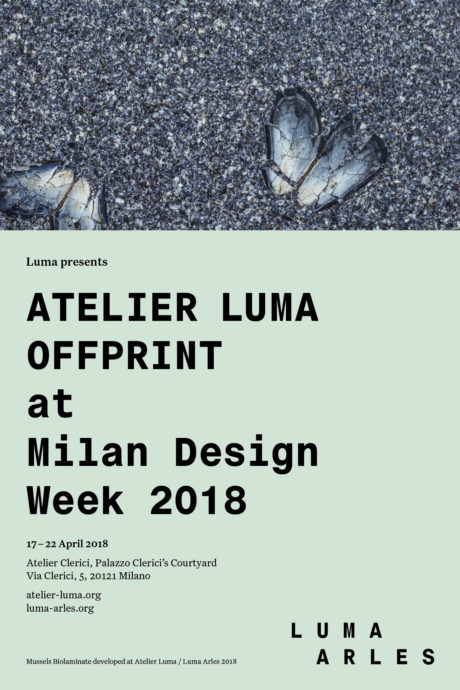