From the start, Atelier Luma was founded with the ambition to become a far-reaching network of individuals, some of which in Arles and the Camargue region, but many of them located in various other places in Europe and the world. How to keep such an ambitious and ever-growing network going? In many ways, such a team could only exist today, when technology empowers communication at a distance, with tools and platforms available at the touch of a screen. One of those platforms is, of course, WhatsApp.

Our WhatsApp group was started in 2016 by financial manager Sébastien Gontal, as he was sitting in the back of a cab with two other team members after a day-long meeting. The first message he sent was a group selfie, sent to artistic director Jan Boelen – “Hello from Paris.” From then on there was no way to stop the messages from coming. Since its initiation, the group has seen new team members added and old team members deleted. It has served as a lunch and dinner bell, and as a way to announce material and equipment deliveries. It has helped us to celebrate accomplishments and to share pictures of beautiful and exciting scenes. Perhaps most importantly, it has been used to express humour—many moments and messages have immediately caused  outpours of laughter.

As the many projects of Atelier Luma grow and evolve, this and other channels of communication help structure and organise the work, and serve as powerful tools for community and team-building across borders and timezones. 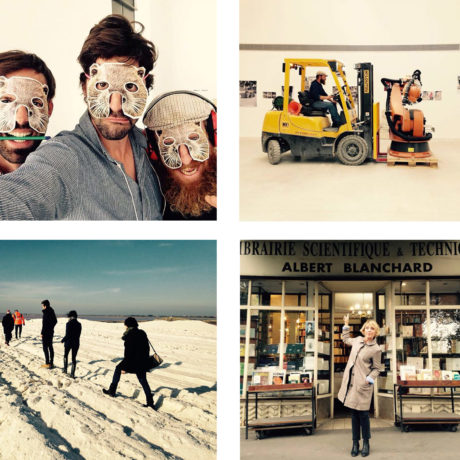